Not everyone’s path is a straight line, I know that from experience. So whatever led you here, I’m glad you found me.

In the meantime, I have a story to tell you by way of introduction…

I was a scholarship kid who always did well in the clearly defined structure of school. There were established rules and prescribed means of attaining external acknowledgment of success. I knew what it took to get A’s and what it took to get people in positions of authority to like me. Life was pretty straightforward.

So imagine my horror when I graduated and realized that there were no rules. No way of knowing I was doing it right.

While my friends knew they wanted to be doctors or architects or work in policy as early as elementary or middle scool, I felt like I was floundering. I did one thing for a few years and then another, dismissing my jagged path as one of a “career hobbiest” or the result of my suffering from “shiny object syndrome.”

Until one of my greatest teachers stopped me in my tracks. 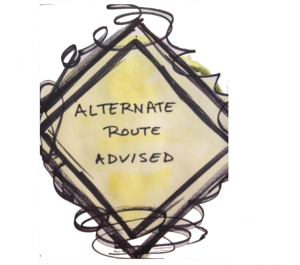 I had just finished one of my colorfully self-deprecating descriptions of my background when he said, “I don’t see that.” Simple, but firm.

“You’re the line of best fit.”

I was a French major, but I remembered lighting my Bunsen burner in junior high, charting the seemingly random dots along my graph of time and temperature and then laying down my Lisa Frank Trapper Keeper so I could use it’s binding as a ruler to draw the line that was closest to my scattershot markings.

I scrunched up my nose, and he went on.

“Your line has the same endpoint as those people who’ve always known what they wanted to do, but when you get there you’ll have a wealth of experience that they won’t be able to draw from.”

I didn’t believe him right away, but knowing that he believed in me and that it was possible there was another explanation for my zig-zagging through life, another way of looking at it that painted it as an asset rather than a liability, gave me the perspective I needed to claim my strengths.

Trying on this viewpoint and testing it out gave me a new way of seeing myself and of crafting the life I wanted.

Turns out, taking the scenic route – and reveling in it, much less living to tell about it – can be hugely reassuring to people who also feel like they’re floundering. Whether they’re

Sometimes it helps to have someone jump down in that hole with them and say, “I’ve been here, too, and I’ll sit with you until you find your way out.”

At the same time, this kind of path builds up a comfort – even an enjoyment – of stepping into the unknown. The call of the Line of Best Fit speaks to those of us who use what information we have in the moment, as well as our breadth of experience, to prepare what we can and then act in the face of ambiguity.

In knowing that this willingness to take calculated risks pays off, we have much to share with those who’ve lit out directly for their goals and are less experienced at meeting curveballs along the way. In today’s rapidly changing world with increasing technology and rapidity of change, knowing that even though there’s much we don’t control we still have to move forward in the midst of incomplete information can lead us to be navigators for those unfamiliar with charting an unclear course.

Pavo, or Peacock, is a constellation that helped early explorers find their way at night.

Each ship’s course was not straight to its intended destination, but a zig zag made by tacking or jibing while still keeping its ultimate goal in sight.

As sailors pursued their best course, the peacock constellation helped them get their bearings and stay on track.

Peacocks themselves represent rebirth and wise insight. Their calls are like bursts of unexpected laughter, reminding us not to take life too seriously, but to stay centered in the present moment and be grateful for what we have.

Those who affiliate with the peacock call it like they see it. They stand up for their beliefs and also live by them.

I established Pavo to help catalyze transformation in individuals and organizations by blending intelligence with creativity, concept with practice. I help people sustain their own Line of Best Fit while holding a light hearted approach, because often the greatest insights are discovered in play.

If that sounds good to you, then stay in touch. I’d love to see what we might create together.